This month – or even this year, I suppose, we’ve been trying out the latest SKINS™ thermal gear in a somewhat vain effort to keep training through the torrential rain and occasional snow-drift. Still, usually having to train/jog in a bunch of layers just to stay warm/dry, I jumped at the chance to lighten the load and find out a bit more about the compression stuff.

The SKINS compression range are high quality base layers designed to align with your body to provide full freedom of movement and comfort during competitive action at any level. Even a level as low as Touch rugby in Inverness on a Monday night.

The SKINS Carbonyte range like the one I’ve been using is aimed at rugby and football and was tested and developed with their partners Bath Rugby Club, but seeing as Jack Cuthbert and Tom Heathcote left, and London Irish and Exeter Chiefs also use and support the SKINS product, we’ve got you a pic of a certain favourite bearded prop practising the famous Girth leg drive in his SKINS compression shorts.

Using the sizing chart on the website I came out somewhere in the middle of medium, but when you first pull it on it feels very tight. That is almost certainly the intent as the Carbonyte model your correspondent tried is described as a tight fitting, functional base layer. So in addition to the strategically placed Carbon threads to reduce friction, and moisture-regulating technology for improved ventilation, the top seems to sort of squeeze your body into an optimum alignment.

Out and about the compression aspect of it feels a little funny at first, but once you actually start running about you can see what they are up to. As someone who’s always struggled with posture problems I was pleasantly surprised it does do a bit to help stabilise your core and keep everything where it is supposed to be, and I definitely felt more upright without having to remember posture all the time while jogging. It’s not a replacement for a stronger core (you can’t wear it all the time!) but it all helps. Nor is it a corset, despite what some of my team-mates suggested… 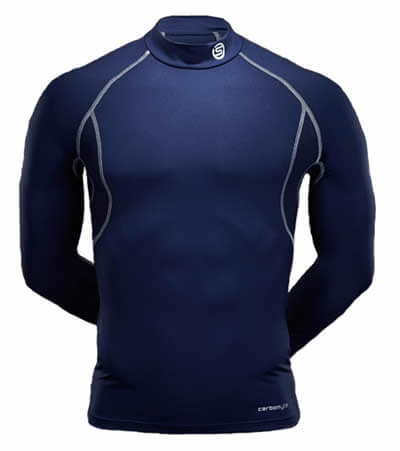 In terms of being a thermal, the top certainly kept me feeling warm in low, damp temperatures and never getting too sweaty, and the turtley-neck helps in the warmth department. Other layers I had on were just a rugby shirt (modern material) and a heavy duty training top. The previous week my other baselayer had to be augmented with another two t shirts, one of them long sleeved. So the SKINS will cut down on dirty washing too, at least in my house.

The next week I pulled it on again (despite the Amber weather warning) and had a run with the guys in sleety/blizzard conditions. Some gentle hill reps with the guys were on the cards and again, the SKINS kept me dry and warm despite minimal upper body movement going on, and made me wish I had some for my legs as well. Once you get back into the dry, the tight nature of the top can make it tough to peel off, but maybe they do just want you to wear it all the time!

So ideal for training (if any of you guys out there have used them for full-on rugby training please let us know in the comments below) and they’d probably also be pretty handy as a base layer for your beer-jacket in the stands at Murrafield in November or February.

Overall so far it has been a pretty positive experience, they don’t come cheap but feel pretty well put together and I’m expecting mine to last at least until the sun comes out.

Which could be a while…

Thanks to SKINS, and London Irish RFC