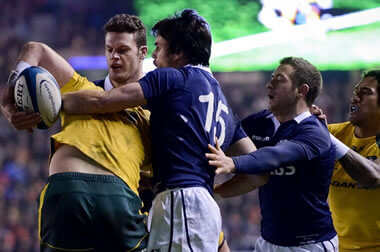 Sean Maitland – Busy and generally competent display. Made occasional errors from the boot and received some rough treatment at times. Slightly ponderous for Scotland’s best chance of a try, looked like he wished he could pass to himself on the wing. 6/10

Tommy Seymour – Good game from Seymour. Aggressive, inventive and full of running in attack, whilst remaining stoically solid in defence. Made some good runs and generally looked like he belongs at this level. Pick of the backs. 7/10

Nick De Luca – Quiet night in attack but made up for it in defence. Seems to be trying to play as a ‘crash-ball’ centre to not much effect. Surely his step is his best asset? So why play to his size weakness? Makes no sense. 5/10

Duncan Taylor – Better than last week by a country mile. Actually looked competent and made some decisions that were positive for once. Very brave to take a loose ball in the second half which left him concussed and substituted. 6/10

Sean Lamont – Should. Have. Scored. I guess the downside of playing a centre on the wing is that he’s not going to jink very much but he should have cut inside and dotted down. And he knows it. Otherwise fine. 6/10

Duncan Weir – Ducked a few tackles, spun a few flat balls, dropped a couple of easy passes and sent some wayward kicks. Mixed night for the Glasgow player as he neither convinced at stand-off nor was the disaster that Jackson was last week. 5/10

Greig Laidlaw – In my opinion he was Scotland’s best player before being prematurely substituted. Clever breaks, brave runs and dead-eye accuracy from the boot (apart from the last kick). Given breathing space in attack and defence this week. Should have stayed on. 7/10

Ryan Grant – Wasn’t very enamoured with Mr Grant tonight. Apart from being stepped for the first Aussie try he was largely anonymous in the loose, failed to dominate in the scrum and generally looked a bit out of sorts. Shepard’s crook came out early in the 2nd half.  5/10

Ross Ford – Much better than last week. His lineout throwing was spot on, including a mammoth throw to a rear jumper inside the first 10 minutes. Going well until taken off injured after 20 minutes or so. 6/10

Moray Low – I got a bit of stick for giving Moray Low a bad score last week and this week he was definitely better (but still not amazing). He wasn’t as dominated physically against the Wallabies but again didn’t do anything remarkable. Apart from getting punched in the ear which got Scotland three points and a sin-binning. 6/10

Grant Gilchrist – Annoymous. In a game in which his fellow lock Richie Gray would have had the space to gallop around he failed to make an impact in attack. Good in the line-out throughout, especially when he fell over from a great height and getting winded but not exciting in any way otherwise. 5/10

Jim Hamilton – Spent his 50th cap constantly telling his teammates to hold their discipline whilst giving away daft penalties. ‘Discipline, discipline, discipline’ was his ironic mantra at every scrum to everyone who would listen. Despite this he managed to start his customary fight within the opening two minutes of the game, a new record for Big Jim. 6/10

Johnnie Beattie – Just doesn’t look right at six. Showed up well at the breakdown but didn’t get enough ball in hand for my liking. Gave any a few too many clumsy penalties too but did his combative best in tough circumstances. 5/10

David Denton – Better than his exercise in self-destruction last week against the Boks but still not convincing as a world-class eight. Needs to develop an offload game to truly be dangerous when Scotland are on the hoof otherwise he’s distinctly average. 6/10

Kelly Brown – Good antagonistic performance from the Captain. Marshalled his defence well, particularly around the rucks. Looked frustrated at times but generally made the right decisions at the right times. 7/10

Pat MacArthur – Came on in the first half and made a bit of a pig’s ear out of the line-outs. Otherwise okay but didn’t take his chance as well as he could have. 5/10

Alasdair Dickinson – Didn’t add a lot to either the set piece or the loose. 5/10

Chris Cusiter – Odd time to come on when Greig was running the show but did his best. 6/10

Ruaridh Jackson – Did he get on? I didn’t notice if he did…