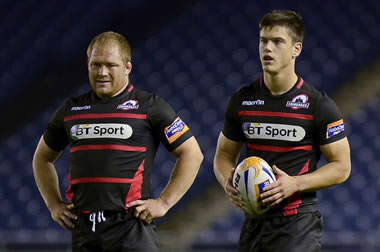 Today at Murrayfield Edinburgh hosted Munster, aiming to rejuvenate their season in a new competition and fielding a much more familiar -and Scottish – looking team than we have seen in recent weeks.

It was a fast paced start with early errors from both sides, but a period of sustained Edinburgh possession allowed the home team to show some of the heart that has often seemed absent.

Matt Scott in particular was prominent, suggesting that however Glasgow-dominated the Scotland team might look come November, he is certain to play a role. No moment was more important than when Edinburgh spread it wide from the ruck and Scott forced his way over the line from close range for the game’s opening try.

Laidlaw slipped the conversion in off the post and added another penalty on 12 minutes: this was much more like the sort of Edinburgh team that the capital’s fans crave.

Munster grew into the game as you expected they would, through a Keatley penalty on the quarter hour mark, while from Dave Kilcoyne to Simon Zebo they were making it tricky for Edinburgh at the breakdown. From an Edinburgh lineout deep in their own half, Donnacha Ryan dominated Greig Laidlaw and the inevitable chargedown led to a converted try for Casey Laulala.

Laidlaw struck straight back as a Munster error at the restart gave him another kick from out wide; again in off the post. But Munster were well in the game now and only a forward pass – luckily referee JP Doyle is not as Irish as he sounds – stopped what looked a certain try. Moments later WP Nel dropped in the scrum and the sharp Conor Murray took the free kick, whipping up a series of high speed forward drives and Mike Sherry dived from the ruck to put Munster back in the lead.

Laidlaw clawed back the margin with another excellent penalty kick and Edinburgh were playing some great attacking rugby to get the ball forward. In at fullback, Cuthbert was impressive under the high ball and Denton carried tirelessly. There were still small errors, but Munster were making them too and Laidlaw put Edinburgh back in the lead approaching half time with a further penalty to make it 5 kicks from 5.

Munster came back straight away with their (surprising) new brand of wide, fast rugby and only a solid tackle from Harry Leonard and a hacked clearance from Visser kept Munster out. They came again minutes later but Visser led the defence again and out-Munstered Munster, holding up the tackler to turn over possession and send them in at half time 19-17 up.

Edinburgh rode their luck at the restart as confusion between Fife and Denton allowed the kick-off to bounce in goal. They couldn’t make anything during the period that followed after De Luca tried to offload to Keith Earls but it was end to end stuff and very entertaining to watch from both teams. Quick lineouts, high-stepping, Number 8s kicking; and that was just Munster.

Boos rang out when things didn’t go Munster’s way; at times the visiting support made it Munsterfield more than Murrayfield. But if Edinburgh played like this more often they would surely get back to growing a home support.

The main area of worry was Munster’s physicality at the breakdown but while generally they were weathering the storm, Edinburgh still made the odd rash mistake and gave away too many penalties.

For every Sean Cox lineout steal or Tim Visser snatching a high ball, there was Harry Leonard kicking a poor grubber with men outside him, or Gilchrist yielding a penalty by holding on. De Luca was caught in possession more than anyone should be.

Luckily Greig Laidlaw had returned with no small amount of spirit and the scrum-half seemed to be everywhere in his pursuit of a win. The home scrum was reasonably solid despite an improbably poor surface, and the impressive Sean Cox was attacking Munster’s lineout with vigour.

Keatley put Munster back into the lead on 52 minutes with a penalty kick and they looked to be growing in confidence.

With 20 to play and the rain appearing, the visitors did not look like budging in their pursuit of a bonus point. Edinburgh were still only a point adrift, but wobbling. By 63 minutes Edinburgh had conceded 5 penalties to Munster’s 1 in the half, and it was a surprise the visitors weren’t further ahead than 19-23.

Then came the moment that set the game on fire, when Matt Scott leapt in the air to charge down a JJ Hanrahan kick, possibly taking the player out in the process with a trailing arm.

The visiting fans booed and Matt Scott looked like he might go from first half hero to second half villain. With the ball still live and no whistle Gilchrist gathered up the pass and arced it over to Visser. There was space, and suddenly the boos were drowned out by the Edinburgh support as Visser turned on his considerable gas and ran in the try.

The TMO ruled there was nothing in the challenge, the TMO ruled the pass was backwards, and Edinburgh’s crowd found their voice as Laidlaw scythed his conversion through the rain to make it 26-23.

The last ten minutes saw Zebo hobble off, and the Edinburgh forwards gasping for breath in the face of choke tackles and pummelling breakdowns, but they were hanging on.

Greig Laidlaw again sniped around any scrum, making usually solid set-piece ball unstable for the visitors and chasing everything. Again it earned a penalty and the crowd grew louder, the kick never in doubt and the lead out to 6.

One last penalty chance came Greig’s way and although it looked a bit out of range, the chance to run down the clock and deny Munster a losing bonus was too tempting. It hit the bar again, but not the right one and Munster scrabbled frantically to get back up and score.

Luckily for Edinburgh they knocked on and the celebrations began.

SRBlog Man of the Match: Vastly improved in terms of errors and penalties, Cox, Denton and Visser were all excellent, while Scott was good but quiet second half. Edinburgh would not have been in this match though without Greig Laidlaw on the park. 7 from 7 kicking and spoiled at least two scrums for key turnover ball, the second vital as it meant Munster needed a try to win. He doesn’t believe in lost causes and that is why his return is vital to Edinburgh if they wish to move upwards.