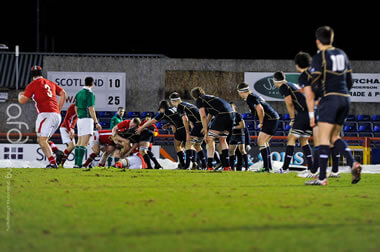 Inverness got its taste of “big time” rugby tonight as the U20s took their roadshow north to a very chilly Tulloch Caledonian Stadium. The early exchanges hinted at cold fingers with plenty of knock-ons and forward passes. Sadly for Scotland U20s, that tale was to continue.

A Scotland team with several pros and EDP players in their ranks took on a Welsh side going well in the tournament and unbeaten so far and ultimately the Welsh had too much class.

Wales early pressure saw Sam Davies converting an early penalty chance to give them the lead. Scotland had almost no ball in the opening quarter of an hour but on one brief incursion Mark Bennett set the crowd purring with nothing more than a half step, perhaps showing how starved crowds are up here of top quality rugby.

It was to be almost 17 mins before Scotland got into the Welsh 22 but that move ended with another knock on. Minutes later they were back and earned a kickable penalty. It looked rash not to take the kick but they got an even better one in front of the posts seconds later to even up the score. Less than 5 minutes later they put a line-out together from a nice deep penalty kick and mauled it powerfully to the line, prop Shawn Muir coming up with the plaudits and the score. So far, so good.

Wales struck back immediately after a scything run from Andy Powell-alike Daniel Thomas who intercepted an Ali Price pass meant for Bennett and fed it on to Cory Allen for an easy try. So far, so shoot-yourself-in-the-foot.

Wales were starting to look sharp when they put it through the hands and grabbed another try through Aaron Warren (converted this time) to take the lead just ahead of half time, and moments later they darkened the crowd’s mood further when scrum half Rhodri Williams went on a darting run inside the 22, looking like a bit of a Gareth Edwards throwback and diving over the line to match.

Wales came right back out in the second half with a lineout on 10 metres but Scotland’s line speed was good and they pushed the Welsh back, before earning a scrum. Wales kept up constant pressure though and looked very skilful with ball in hand (even prop Gareth Thomas sold Mark Bennett a dummy his namesake and famous Ice Dancer would have been proud of).

Scotland kicked too much but looked good when they put phases together, sadly though Wales were in the mood to capitalise on any errors and worked another good try out wide for Jordan Williams. Soon after the impressively oppressive openside Thomas was binned for what looked like offside but he had been a thorough nuisance (as all good 7s should be) so perhaps the ref was weary of it.

Scotland should have capitalised but contrived to knock it on after a great breakout by Rory Hughes, Tommy Allan and replacement scrum half Scott Steele. Hughes looked powerful with the ball but had few enough chances out on the wing, to his obvious frustration. Not a night to be a winger, unless you were in red.

The props were having more fun though as Wales chalked up a further penalty try to send the small Welsh contingent into vocal delirium and put the match truly beyond doubt. To ice the cake further a try run from their own in-goal area drew applause from an appreciative crowd.

Scotland to their credit kept trying and battered away with a man advantage for the last ten minutes, big carries from Jonny Gray failed to breach the Welsh defence until Adam Ashe barrelled over from short range.

The good sized crowd watched in frozen hope that their team could spark something but too many basic errors (knock ons, missing touch penalties, kicking soft balls away) starved them of possession.

The Welsh were clinical enough to take their chances well. Hopefully not a sign of things to come.