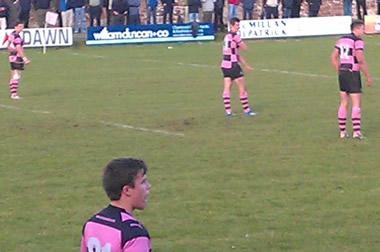 The RBS Premiership is a very competitive league this year with every team capable of beating any other on their day. Yet at the half way stage there was a gap of 20 points between top and bottom. Dundee HSFP, battling proudly in the B&I Cup this year, are bottom of the league. Why?

And Ayr, who didn’t make the top 4 last year, are sailing along averaging nearly 30 points a game, with only 1 loss in the first 9 games.  How come?

At Premier 1 level, physical conditioning and technical skill probably even themselves out across the 10 teams. So whether a team is top or bottom of the league probably depends as much on psychological factors as anything – concentration, confidence, control, and commitment. Gone are the days of Brian Gilbert’s famous aphorism when he was a frustrated Hawks coach and retorted ‘When the going gets tough the tough go skiing’. Commitment is much the same across the league.

What a strange beast it is.

On Saturday I went to Millbrae to watch Ayr v Boroughmuir. They sit at opposite ends of the table, Ayr had a big win in their first meeting this season, and were coming off a 50 point drubbing of Aberdeen GSFP last week. Boroughmuir in contrast had just suffered another another narrow defeat at Raeburn Place. A big home win seemed on the cards. Nothing in the first 20 minutes altered that opinion. Boroughmuir gave a fine reprise of Edinburgh the night before against Llanelli, as they fell off tackles and coughed up possession easily, and Ayr ran in 3 tries through (the always confident) Grant Anderson (2) and Richard Dalgleish.

There was no shouting from Boroughmuir’s thoughtful coaches, Fergus Pringle and David Officer. There was no signal to ease off from the animated and anxious Ayr coach, Kenny Murray. But for the next 40 minutes Boroughmuir dominated the game. Their well drilled pack pushed Ayr off scrums, won break down ball & battled competitively at the line out. After tries from the bullocking George Turner and Jordan Webster the score stood at just 22-20 in Ayr’s favour with 5 minutes to go. The game was there for Boroughmuir’s taking. Except they didn’t believe they could do it.

You could see it, sense it, smell it. And so it proved. With 4 minutes to go Craig Gossman streaked in for a try which Finn Russell converted from the touchline (where did he suddenly discover that confidence from?) and Boroughmuir were left to kick a last minute Warnock penalty to claim a losing bonus point. That was all they expected. All they hoped for. And all they achieved.

Confidence. Where does it come from? How do you keep it? Where do you lose it?

When does that winning quality evolve into arrogance that is self defeating?

Is it a skill that can be learned? It’s in notorious short supply in Scotland.  Ask Michael Bradley just now.

And maybe ask Graeme Young what the secret is. His team, Stirling County, lost last week at Bedford 87-10 (12 tries to 1). 7 days later they go to the Greenyards and beat the Scottish champions Melrose 35-29.