It was tight, but in the end Melrose did just enough to muscle past Dundee HSFP and retain their Premier A title. The Borders club has had the crown for two years in a row now and it may well have been their experience that saw them over the line.

In truth, they made hard work of it. The League season is over and many will now kick back and say ‘job done’, but this would betray the jitters on show for many of last few games.

As the leagues split to have a Premier A, B and C there was a fight on in Premier A to see who would be champions and which four teams would be competing in the British and Irish Cup next term. Some believed Melrose would be too strong, but surprise package Gala, Melrose’s local rivals, were bearing down on ‘Rose and Dundee were building towards an historic season.

Gala had proved they had the beating of Melrose, but the champions elect were cushioned by bonus points accrued at the start of the campaign. However, the moment everyone realised it would not be so cut and dry was when Dundee snatched victory at the Greenyards at the start of 2012.

Streaking ahead in the first half it looked like Melrose were too strong for their northern counterparts. Enduring tales coming out of Mayfield suggests that the Dundee captain, Neil Dymock, overheard Melrose’s coach, Craig Chalmers, saying to the crowd that it was “too easy” in the first half.

According to a journalist I have spoken to who was lucky enough to be there on Saturday 14th of January, the second half fight back was one of the best he has ever seen in rugby.

Dundee steeled themselves and went after the substitutes thrown on at half time. They played direct, but smart rugby, and at the end of all the endeavour –not to mention a few tries –a touchline kick ensured that Dundee had overturned a large deficit to triumph. They were down 28-9 at half time, but they left Melrose with a 37-35 victory.

Questions were raised about Melrose after this, but they responded by winning three games on the bounce against Ayr, Currie and Stirling County. Dundee won their next game, but lost to Ayr away, meaning that it was still pretty tight at the top.

Gala, meanwhile, had experienced mixed fortunes, losing to Aberdeen, thumping Boroughmuir and then succumbing to a tenacious Stirling side.

When it came time to upset Melrose once more, though, Gala took their chance. They could not win the league by this point, but they sure as hell looked set to spoil Melrose’s party.

Gala lost to Dundee in a close game on the 4th of March and then, just one week later, turned on the power, trouncing ‘Rose 26-11 and denying the team in black and yellow a bonus point. Dundee also won that day with a bonus point victory over ‘Muir. Gala had inflicted damage on their rivals, and in the process all but ensured themselves a B&I Cup place.

So it came down to the last few games.

With two games to go both Dundee and Melrose achieved winning bonus points as both sides scored identical 43 points against Currie and Aberdeen respectively. It came down to the last game, and if Melrose lost and Dundee won with a bonus it was Dundee’s first ever title.

Melrose have been around the block more than once, though, and on Friday the borders team did just enough to ensure they squeezed past Boroughmuir in extra time, meaning that Dundee had to win against B&I chasing Stirling with a bonus point and 53 extra points.

This was a monumental task and one which seemed too much for a Dundee team that had gone hard all season. Perhaps they were drained by losing a cup semi-final to Gala the week before, perhaps it was a sense of inevitability as Melrose dug deep and did what they had to do. Whatever the case Dundee could not get away from a hungry Stirling side and fell to a 22-12 defeat. 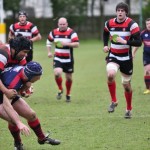 Credit must go to the champions, Melrose. They have proven that they have enough heart to back up last season’s success and they are worthy winners. Dundee ran them close, but will have to be happy with their best ever season in Premier rugby, finishing second and putting themselves into next season’s B&I Cup alongside Melrose. Joining them will be both Gala, who have had a great season themselves, and a combative Stirling side. Good luck to all four against the best of the British Isles next term.

There is of course the Scottish Cup final on the 21st of April when Gala play Ayr at Murrayfield. That should be an intriguing game and any fan of hard-hitting rugby should try and make it down.

Finally, please note that it is all change next season. With the top two teams from Premier B, Heriot’s and Edinburgh Accies, going into next year’s 10 team RBS Premiership there will be a new, more intensive set-up. The competitors will be: Aberdeen, Ayr, Boroughmuir, Currie, Dundee, Edinburgh Accies, Gala, Heriot’s, Melrose and Stirling County.

The rest from Premier B will be making up next year’s newly named Championship, alongside the top half of Premier C. So the competitors will be: Biggar, Glasgow Hawks, Hamilton, Hawick, Hillhead/Jordanhill, Jed-Forest, Kelso, Selkirk, Stewart’s Melville and Watsonians.

The bottom half of that division will be falling into regional leagues next term alongside those from Premier 3 (congratulations to Howe of Fife for their title win in the last ever Premier 3).

So that’s it. Done for another year. We can all take a well deserved rest….after the Melrose 7s this weekend…. and the Cup Finals day…sigh…