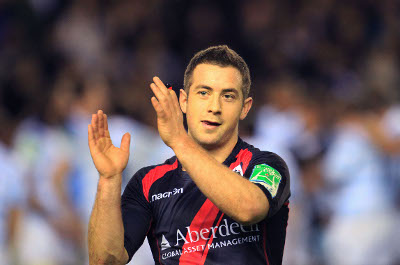 A sense of occasion was unavoidable as Edinburgh welcomed Toulouse and over 37,000 fans to Murrayfield. There was noise, mirth, goodwill and optimism in the crowd, but it must be said there was also a sense of the unknown as the capital side ventured into little-seen territory.

If there were any nerves about this, though, then it was translated into industry. After a scrum fell apart the ball fell into black and red hands there was a moment where white Toulousain players stood facing Edinburgh numbers. The last thing anyone expected was an up and under kick, but with Jauzion starting in the unaccustomed position of full-back Edinburgh thought it was worth a go.

The ball was dropped by the defence and Blair caught it, tumbling over the line and drawing cover. The TMO gave it and as Laidlaw knocked over the conversion it was 7-0 after 2 minutes.

Lionel Beauxis replied with a lugubrious kick of his own but the game stayed at 7-3 for some time.

It was a lottery at scrum time thanks to referee Nigel Owens, but Edinburgh did not seem fazed. Toulouse had the upper hand in the early exchanges, but there was no way of knowing who would get the extended arm from the referee and Edinburgh were happy to retreat and make more tackles. So when Beauxis chipped over with another penalty to take it to 7-6 there was an air of defiance.

The great thing for fans was that Edinburgh had decided that the way to respond to those moments was to throw caution to the wind. So Tim Visser eyed a gap, threw a fend and bent a pass round his back to Cox. It signalled some adventure, and although no points came from it there was a show of intent by the home side.

However, if the home side were adventurous in attack, they were risky in defence. On the 26th minute Allan Jacobsen interfered from an offside position straight from a tap and had to be yellow carded. Two minutes later Ross Rennie killed play under the posts and was frog-marched off the pitch as well. Beauxis kicked three points against the 13 men.

With so much space Edinburgh struggled to keep up and when Matanavou caught a pass with less than half a pitch in front of him he found it easy to burn past Mike Blair and with a dispatched kick it was 7-14. The crowd were reminded that this would not be easy.

That being said, Edinburgh scrapped at breakdowns and despite Toulouse flying up in impressive defensive lines, Laidlaw leant back and sent a drop-goal towards an appreciative crowd. The half ended 10-14.

Toulouse knew that their half-backs Burgess and Beauxis had been shaky and if they were to win this game they needed to give the ball to the likes of Yann David and Matanavou who had worried Edinburgh defenders. What did happen, though, was that Edinburgh yapped and snarled, taking on a huge Toulouse team and suffocating them.

Servat was forced to concede a penalty under his own posts and as captain Dusautoir pushed him, clearly disgusted, the referee produced a yellow card. Laidlaw helped himself to the points and when Edinburgh rebounded on a Toulouse scrum minutes later they were pushed even further into a 16-14 lead.

Beauxis had a chance to pull some points back in the 54th minute but the crowd were getting more and more vocal by this point and the stocky French cap could only stick it short. Toulouse looked weary and lacking in ambition, throwing up high kicks for Edinburgh’s cover to field.

On the other side the Gunners were starting to believe in themselves even more. Cross-field kicks began raining down from the boot of Laidlaw and Visser almost burst clear, if only for a fortuitous slip from his opposite man. That ball slid into touch and Toulouse, trying to force themselves into action, attempted to break from a quick lineout.

They lost it, and much like the rest of the half, had to wrestle with an Edinburgh pack determined to inch towards the posts.

Doussain, on for a disappointing Burgess, rarely got clean ball at the back of any lineout or scrum. There was little Toulouse could do as a black and red enforcers clamped on to guddling attackers. Twice Lee Jones flew up and introduced French backs to gravity, and more often than not knock-ons were the result. The crowd lapped it up.

By the time the clock had run into the 79th minute Toulouse exhaustedly gave away another penalty, Man of the Match Laidlaw punched it through to make it 19-14.

Edinburgh had made history.

They now face a trip to the Aviva stadium and a first ever Heineken Cup semi-final. As the 11th side in the RaboDirect Pro12 that is quite a shock, but by the same token it is a hell of a fillip for Scottish Rugby and there will be an awful lot of back-slapping tonight.