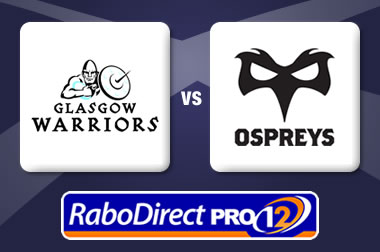 Glasgow headed to Wales hoping to exercise the demons of some disappointing draws. What they found was a game where both sides struggled to hold on to ball for any significant amount of phases, but one which was forgiving to the willing runner.

The match started with the Ospreys running simple moves and Glasgow flying out of the line like they have in so many games before. There were knock-ons, a charge down, hefty hits and an unwillingness to pass more than twice. The game was more notable for reset scrums and a stern talking to for the front rows, than silky skills.

It took a sprightly break from Ospreys 9 Webb and physical winger Hanno Dirksen to spark this game into life. The South African born, bleach blond back streaked down the touchline and looked to be over in the corner but Chris Fusaro tracked back well and wrapped him up to deny the score. The ball was cleared and everything returned to the stalemate.

On the 12th minute that was shattered as Jackson clipped over from inside the 22 once Ospreys erratic number 8 Bearman worked his way around the side of the ruck to infringe. However, only minutes after this the score was set at 7-3 when Dirksen made another break and pulled away from the defence after bursting a Lemi tackle.

The rest of the half was one way traffic after this, though. Glasgow marched over with ease following a kick to touch and then Jackson hit another penalty following Ospreys skipper Tom Smith taking a yellow card for again coming round the side.

When Dunbar made another smart half-break and drew fire Henry Pyrgos picked, took a step and popped to Colin Shaw who dragged a few defenders over the line with him. It was converted to make it 20-7.

Bigger scored another penalty on either side of half time, and with the score sitting at 13-20 the crowd were again treated to men aimlessly running into each other and prodding ball forward with either hand or foot.

Jackson missed a penalty on 50 minutes, but Ospreys lost their senses. Glasgow snaffled the drop-out and worked phases back towards Ospreys’ line. The ball was hoisted into the try area, rugby league-style but only just bounced out of the back. Jackson took another penalty, but hooker Hibbard was lucky not to be yellowed for again slowing down ball. 13-23.

The game then lulled once more. Biggar kicked a penalty dead from the halfway line and some players ran hard, but nothing happened until the 65th minute when Jackson scored another penalty and Loose-head Ryan Bevington was sin-binned for hauling Al Kellock down in the lineout.

With a man down in the opposition ranks the Warriors again pushed, trying to make something that they were previously unable to consider. They ran with purpose and Beattie, now on, ran well as Lemi and MacArthur. Murchie made a break and looked to be under the sticks, but referee Paterson brought play back for obstruction. Al Kellock took exception to the stoppage and grabbed some Ospreys to have a word.

Kellock was yellow carded for exacerbating the situation and Ospreys tried to play back into the Warriors, but they could not get out of their own half. With 14 men on either side there should have been more space, but Glasgow pinned the Swansea side down well.

Then Beattie was yellow carded for a tip tackle, rather harshly. Ospreys drove a 5m lineout and flopped over as they sheared off the side of the drive.  It was 20-26 but Glasgow scrambled back, again led by Dunbar.

The last few minutes were played out with Kellock back and almost denied Ospreys a bonus with a last minute penalty attempt from Jackson, but he slapped it wide. Glasgow did well to scramble, but they never pulled away from their opposition and they made life difficult with conceding penalties in the second half. It was scrappy but thanks to the likes of Fusaro, Dunbar and Lemi they managed to hustle their way to the victory, their first ever at the Liberty and a valuable one for their playoff push.