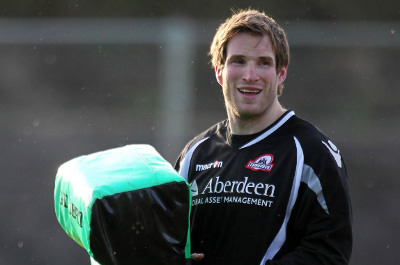 Phil Godman has never had that easy a time of it. He’s had some torrid experiences in an international shirt, and frequently come off second best to, well, Dan Parks. This season he finally recovered from a long term injury (that saw him miss another World Cup) only to find he’s stuck behind a 19 year old and a scrum half in the pecking order for Edinburgh’s 10 shirt. Never mind Scotland’s 10 shirt. But on Saturday he came on as a sub and kicked the winning drop goal that one imagines would earn forgiveness in the hearts of many an Edinburgh fan for the odd hospital pass or run up a blind alley over the years.

Afterwards he was swamped by his team-mates and looked fairly bewildered by it all in his borrowed-scrum cap. Those players are delighted to still be in it, having put in a season’s worth of effort to get where Edinburgh sit: atop their pool. Phil may not have been much involved in the campaign to this point, but he’s been working hard to get fit and is a big part of it now.

That’s right folks: it’s Round Six of the Heineken Cup Pool stages, and Edinburgh are still in it.

Although themselves out of the running by Round 5, well-funded and well-supported Racing Metro started ominously with Chabal leading the pack and centre Estabanez making strong runs all through the first half. They clearly did not want to roll over at home. Chabal was a blink away from a try in the corner early on and several moves saw Racing string together brilliant offloads at pace only for that last pass to falter on the rocky shore of Edinburgh’s scramble defence.

Luckily there was direct running from the visitors too, in particular from Talei, Cross and De Luca. If there were no such thing as scrummaging, you’d fancy Jacobsen/Ford/Cross to be the starting Scotland front row with Moray Low injured. As it is, with Euan Murray’s Newcastle struggling, Cross might have just edged into the stronger position.

Blair and Laidlaw were running the game at high pace and looking for opportunities wherever possible, but the most opportunistic moment came when athletic openside Ross Rennie – now a serious challenger to Barclay if he can last the pace – waltzed through a gap that shouldn’t really have been there for a sprint to the tryline.

After Racing tired in the dying moments of that last epic match at Murrayfield, Edinburgh had been running the match at a high tempo from the kickoff hoping for a repeat performance at the end of this one, but Racing stuck with them and matched the Scots try for try, penalty for penalty.

So Steyn cut in under the posts after a great offload from Estabanez in response. Talei stretched for the line on the half hour; Racing almost scored at the other end. After the half time break they made up for it with another dangerous looking spell, Juan Imhoff scoring a great individual try. Anything you can do: Denton scored an equally impressive individual try, followed by one more from Racing.

A couple of penalty kicks later and it was 24-24 going into the dying moments, the lead changing hands almost as often as in a 49ers playoff game.

Last season, and early this season, it looked like Edinburgh revolved around getting the ball to Tim Visser (or Chunk) and allowing him to batter over the line. This season it has been extremely gratifying to see Edinburgh develop some depth and make substitutions (mostly) for good reasons.

Their game plan now revolves around a back-row unit of the highest quality, a plucky figure in the 10 shirt and a little general at scrum half.

Just not always the same ones.