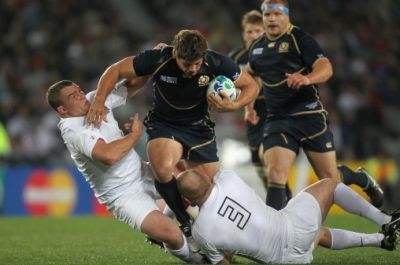 Ross Ford, the 27-year-old Edinburgh Rugby hooker, was today appointed Scotland’s new captain for the opening match of the RBS 6 Nations Championship – against England at Murrayfield on Saturday week.

Ford, the 53-times-capped product of Kelso High School, a British and Irish Lion in South Africa in 2009, was hailed by head coach Andy Robinson as a “man who will step up and lead from the front.”

Ford is deserved of his place, and has over the past few months of Heineken Cup campaigning started to display the sort of form many of us knew he had in him. He’s still a young man, and if he could just sort out those line-out throws – which have improved markedly but still go awry from time to time – he could well be a great captaincy figure for a long time, at least through to the next World Cup.

We’ve seen his willingness for ball carrying increase to go alongside his formidable physicality in defence. His workrate making tackles against London Irish on Sunday was exactly the sort of thing Robinson will have been looking for to set an example to the rest of the squad.

It has also been revealed that Kelly Brown – another quiet, hard worker – was indeed Robinson’s first choice for the captaincy as the other “banker” on the team sheet, but that he will take no part in the Six Nations through injury.

Robinson said: “This is a special day for Ross, who has been a key figure in our leadership group and our most consistent performer for some time. I firmly believe he is the man who will step up and lead from the front.

“That said, I’m really disappointed for Kelly Brown.  I had asked him to be the captain late last week but unfortunately injury will deprive him of that honour and the chance to lead out his country for his 50th cap. I wish him a speedy recovery.”

Scotland team doctor James Robson said: “Following the scans that Kelly underwent yesterday and consultation with a knee specialist, Kelly will require a small operation to stabilise the fibula head in his leg – which he dislocated.  The surgery will facilitate his recovery.

“This will be undertaken in the next seven to ten days once the initial swelling has settled.  The return from an injury of this nature is, typically, in the region of eight to ten weeks.”

Ford echoed Robinson’s message for Brown and then reflected on his own elevation to become Scotland’s 112th Test match captain.

“It’s a massive honour and privilege to captain your country. I’m really grateful to be given this chance to captain a team of so much potential,” he told www.scottishrugby.org

“For me, the big thing is leading from the front and actually showing a good example to the boys as well as backing it up with words.

“First and foremost is ‘do it’, do it for everybody to see, and that’s the way I’ll be looking to lead the team against England.”

Brown said: “I’m gutted to be missing out as it’s hard for me to quantify just how much it means to me to play for Scotland.

“But today I want to offer my whole-hearted congratulations to Fordy who I know will do a great job as captain.

“I’ll also be doing everything I can to assist the boys who are chosen to play for Scotland to get the championship off to a winning start against England.”

The selection of Ford points to lessons learned by Robinson over the World Cup about the risks of picking captains not guaranteed their place in the team but perhaps it also refreshingly sends a message to any former captains out there who might have been considered – Cusiter, Blair, Kellock, Lawson – that their place will now be decided on current form. This might also give heart to young Laidlaw who could well challenge for the 9 shirt safe in the knowledge that he won’t be leapfrogged by a captaincy type. Of course, we’d all rather see him at 10 though wouldn’t we?

Jon Welsh, the uncapped 25-year-old Glasgow Warriors prop, has been added to the Scotland squad and he trained at St Andrews today.