Kicking down the door and shouting “Sucka” (while no-one really gets hurt) like the Mr-T of sports journalism that we are, I bid you welcome to a new season of rugger-based ramblings. Oh, wait, the season hasn’t started yet. Still, there is some stuff to report, namely that two of Scotland’s favourite sons went head to head the other night in a pre-season friendly between Sale Sharks and Perpignan. Chris Cusiter started at 9 and may or may not have played the whole game – they’re not exactly reporting the hell out of this one – while Rory Knee-Face Lamont (Batman’s new nemesis) seems to have sparked a bit of a second half fightback, scoring two tries to leave the final score a tie at 24-24. The good news is he was playing at 15, hopefully a position that Saint-Andre will give him a run at this season. Otherwise he may end up marking his brother…

Glasgow seem to have beaten Castres in a pre-season friendly, without most of their top players and trialling some of the ELVs. New signing Mark McMillan hopefully gave an indication of things to come with a late try to seal the win, whilst Colin Gregor illustrated his versatility by kicking most of his goals. Here at SRBlog Towers, we’re almost as happy to see McMillan at Glasgow as teammate Dan Parks: 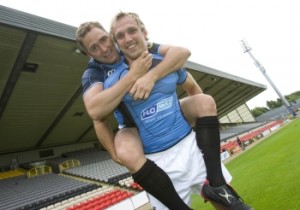 Welcome back to Scottish Rugby Blog. Come in, the water’s lovely.

6 comments on “Scottish Rugby Blog is Back”