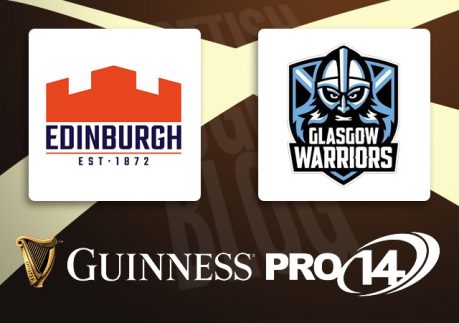 Glasgow were forced into a last-minute change with Richie Gray having to drop out, but slightly thankfully – given his horrendous run of injuries over the last few years – it was not due to injury, but someone in his extended family having tested positive for coronavirus. We wish them good health and a speedy recovery.

Some sloppy handling saw a trio of knock-ons within the first 90 seconds, and Glasgow were caught offside a few phases after an Edinburgh scrum. Scotland U20s star Nathan Chamberlain had a chance to settle some “on deboo” nerves, but his effort from just right of centre-field didn’t turn in enough to split the posts.

At the other end of the appearances scale was Fraser Brown, and the latest Warrior to join the 100-appearances club, bustled his way over from a line-out move after Zander Fagerson had won a scrum penalty against Pierre Schoeman.

It was further evidence of Fagerson Snr’s (he’s still only 24!) improvement in his scrummaging, as he had also won the first penalty against Six Nations’ star loosehead Rory Sutherland last week.

Edinburgh were offered a chance from an identi-kit position when Stafford McDowall got pinged, but Mike Willemse’s throw went astray, however the scourge of Glasgow, Duhan van der Merwe, made a typical scintillating break to set Edinburgh close to the try-line which led to a contentious call to yellow-card Huw Jones.

Watson had broken through, and after Adam Hastings made an initial tackle which caused Watson to dip, Jones went high with his tackle attempt.

Referee Ben Blain had dished out 5 yellow cards last time he refereed this fixture, and initially thought a penalty-try and yellow was appropriate for this, but TMO Neil Patterson – who had alerted Blain to the infringement – convinced Blain that a penalty only would be sufficient, however Huw Jones still went to the bin.

There wasn’t to be a 5-pointer for Embra, but Chamberlain struck over the penalty to reduce the deficit and claim his first points as a professional.

Zander Fagerson won another scrum penalty which Hastings put to the corner, but a line-out screw-up led to a fake throw from Brown, and subsequently an Edinburgh free-kick, which Kinghorn smashed back towards the Glasgow 22.

The danger was cleared, but a cheaply conceded penalty for crossing by Tommy Seymour as he ran into Matt Fagerson gave Edinburgh a penalty which went to 5m from the still 14-man Glasgow line.

Edinburgh were initially repelled, but another pen conceded put Edinburgh within striking distance. Willemse hit his jumper and Edinburgh moved in-field, only for Oli Kebble to get over the ball right in front of the sticks and win the penalty.

As the half drew to a close, Oli Kebble drove through Simon Berghan to win Glasgow another scrum pen, and a nice switch of direction by Horneito gave Glasgow some space to attack, however Zander Fagerson was held up on the line.

Rather than take an easy 3-pointer, Glasgow went for a tap-and-go seeing as there was nothing on the line in this meaningless game (yes, I’m doubling-down on that opinion) only for Brown to spill the pill as he dove for the line.

An early scrum on the Warriors’ 22 saw another penalty going to Glasgow for wheeling, again given against Schoeman on the loosehead side as he pushed through, but the rest of the pack didn’t go with him, causing referee Blain to issue a warning over the number of penalties conceded at that element of the set-piece.

Cockers had seen enough of that, so he took off Schoeman, Willemse and Berghan for Sutherland, McInally and Nel, but at the next scrum it didn’t make a lot of difference.

Zander again put some pressure on, Hastings made a half-break, then fed Stafford McDowall who put a little grubber in, forcing a defensive line-out for the “home” home side.

Glasgow initially sat off the maul, but the experienced Harley gave away a soft pen for lifting a leg as Edinburgh set it up, but “Big Bad Bob” slightly redeemed himself by charging down Shiel’s box-kick at the next attempt, and even managed to deflect it back onto Shiel’s leg to give Glasgow the throw just beyond the 10m line in Edinburgh’s half.

As was the case last week Glasgow had the better of the first hour, but also like last week – and as they’ve shown this season – it’s Edinburgh who looked to capatilise on errors and counter-attacking ball.

A good kick to the corner saw captain Chris Dean bolt on from a line-out, but more good jackal work from work from Kebble gave Glasgow a penalty about 15m from the line, and Warriors scored a superb try.

Ali Price – just on for George Horne – tapped and shifted the gears to take the ball deep into the Edinburgh half.

The rapid style and crisp execution that we’ve come to expect from Glasgow over the years all came back in one possession, leading to Ratu Tagive squeezing in at the left-hand corner for a lovely score, involving forwards and backs alike, the final pass coming from Huw Jones, who again looked suited to the full-back role.

Another quick counter led to an Edinburgh infringement and Hastings extending the lead with his boot to take the score to 15-3 in Warriors’ favour.

Edinburgh got themselves a scrum pen close to the line, this time going against the impressive Fagerson who must’ve been knackered after another 70min+ shift.

Edinburgh squandered the line-out and the game fizzled out to a conclusion, which will please Danny Wilson, but in the grand scheme doesn’t change much for either club.

SRBlog MOTM: The newest Glasgow centurion, Fraser Brown is right in the mix, but Zander Fagerson just gets better and better. Still only 24 years old, his scrummaging is now international class – he’s bested both Sutherland and Schoeman in the last two weeks – his stamina for a tight-head is incredible, and despite a knock-on early doors, he’s more than useful in the loose. Dare I say it: Lions potential.

Attendance: 700, apparently, unless someone couldn’t make it.