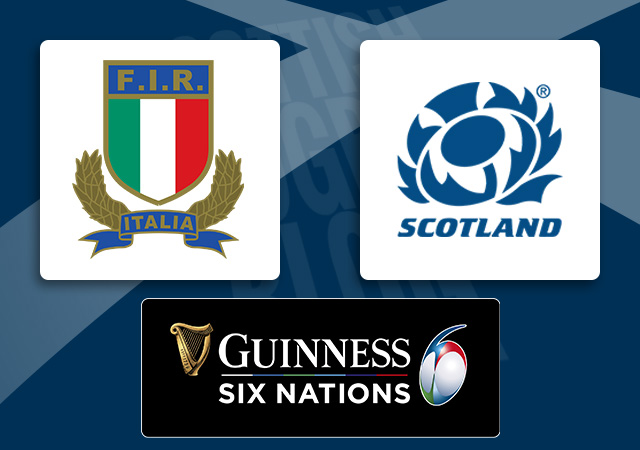 This game took place in full Roman sunshine at the Stadio Olimpico, in stark contrast to horror show that was Scotland’s previous game for the Calcutta Cup. A testing high kick by Adam Hastings into the line between light and shadow suggested conditions could still play a part, but nothing like as dramatic.

Oddly though, the opening exchanges of this game were dominated by scrums. The net result was one penalty each way and one with honours even, but a mammoth touch finder by captain Stuart Hogg saw Scotland come out of that ahead.

A long lineout throw – the sort of wacky attacking play that they carelessly also tried in the hurricane two weekends ago – was gathered by a flying Sam Johnson who burst the Scots inside 5 metres of the Italian line. Hogg came close with another jinking run, but then Scotland battered away in the forwards with haphazard pick and go play, before Magnus Bradbury knocked on having left his eyes off the ball. Sean Maitland was in acres of space out wide. Familiar?

At the ensuing scrum Scotland at least won a penalty with Rory Sutherland toasting Zilocchi again, which was a theme of the half – Zilocchi only lasted half an hour before he was hooked. Hastings missing the penalty was a poor return, and he followed that up with a kick out on the full which served as an example of how loose play killed any momentum the set-piece was gaining.

The first bit of real excitement came from Italian winger Mattia Bellini, who cut the Scotland defence open from inside his own half after a chip kick wasn’t re-gathered, and only frantic scrambling defence from Hogg and Hamish Watson saved Scottish blushes.

Hogg has had a few moments he’ll want to forget in this tournament, but his next intervention was pure class of the sort we are more used to. Following the ball changing hands, Hastings picked him out on a counter attack and Hogg beat Sebastian Negri then went round Luca Morisi to dive in at the corner, ball clutched tightly to his chest.

Confidence in some measure restored, it was still a scrappy half from Scotland, with too many good things undone by errors or penalties going the other way. Watson and Jamie Ritchie were making real nuisances of themselves and carrying often.

Ali Price was lively and had a try chalked off following an offload from Watson that went forward, and could perhaps have had another just on the stroke of half-time, but for a knock on after Stuart Hogg broke through the Italian defence. Blair Kinghorn was also very involved, showing some nice touches in attack and defence.

Scotland were looking more dangerous in broken play than going through the phases, where they were easily read by the Italian back row who also picked their moments well to compete at the breakdown, getting on the right side of referee Ben O’Keeffe.

A couple of penalties – included one kicked off the uprights by Tommy Allan – gave Italy some territory late in the half but they couldn’t get the points on the board. They were still very much in touch with Scotland though.

Scotland started the half strongly, with Watson, Bradbuy and Ritchie so nearly combining for a try with only the excellent Jake Polledri stopping Ritchie from gathering the offload cleanly just metres from the line.

The oft-maligned Chris Harris used his power to get over the line following another of those endless, nervy forward pick-and-go parties, with what seemed like his first touch of the ball on 47 minutes. Hastings conversion off the uprights; Scotland just couldn’t pull away.

Hastings had a superb break carving Italy wide open but he held the ball too long and the offload fell loose. Italy counter-attacked, finally showing the offloading game they developed against France with Jayden Hayward and Morisi causing mass panic.

Superb work in the tackle by Ritchie and Bradbury earned the 15th turnover Italy had conceded. Ritchie might have been lucky not to get a card, but was rewarded instead with a penalty. The back row were keeping Scotland ahead, Ritchie even throwing in a nice touch finding kick.

An Italian scrum penalty might have been a sign of things changing but Zilocchi, having been hooked, was then forced to return when Riccioni was stretchered off. O’Keeffe was also allowing the scrum to go down in order to get the ball in play rather than whistle yet another penalty.

Harris made a decent break but when it came over to Hogg on the other wing, he almost got free but was pinged for holding on.

After 54 mins George Horne, Matt Fagerson and the props swapped and Rory Hutchinson was on by hour mark (for a Harris HIA). It was finally a chance to see them in a tight test match.

Still only 10 points behind, Italy upped the pressure on Horne at the base of the ruck, stifling his and Hastings time on the ball. As Italy’s urgency grew and time ticked down, Scotland grew nervy. There were yet more turnovers: after a nice break from Horne, Hogg put a touch finder straight out.

The TMO intervened when Grant Gilchrist was spotted for a high tackle but then subsequently dumped on his shoulder – some feat of lifting – by sub hooker Zani. The Italian went to the bin for the final ten minutes. Again though, Scotland couldn’t capitalise on the pressure and fluffed the lineout, giving Italy scope to run it back at them again.

Even the new lads weren’t immune, Hutchinson grubber kicking once or twice when holding on to it might have been more prudent.

However, Hastings conjured a last bit of magic as Horne was snaffled into a ruck by eager Italian forwards. Hastings, playing scrum half, looked up and saw an acre of space on the blind side and he jogged across the 22 and in for a converted try. 45 seconds left for the bonus point?

That, of course, was highly implausible, given the number of turnovers. Italy launched one last attempt to break their doughnut as the clock ticked over. With a tough final couple of rounds still to come, holding out the hosts to keep them off the board with a strong defensive set will have been a welcome sight for the coaches.

An impressive breakdown effort, continued improvement in defence, one piece of class from Hogg in his first win as captain and proof Scotland can score inside the red zone. It sounds good on paper.

But is it enough to trouble France and Wales?

SRBlog Man of the Match: an industrious performance across the squad, but the back row made the difference in this game. Probably a 50/50 split between Hamish Watson and Jamie Ritchie.