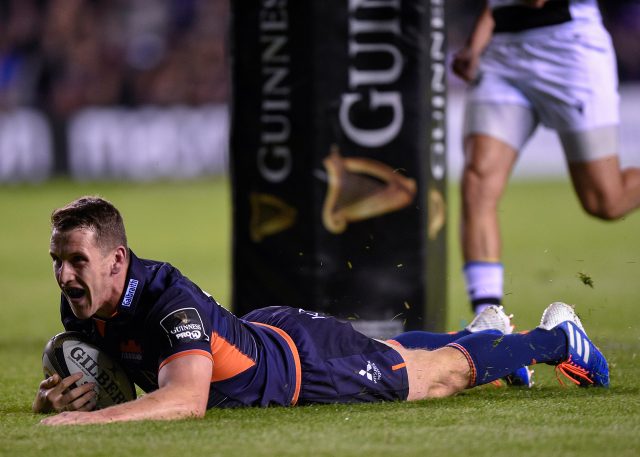 Edinburgh have made a good start to their 2019-2020 PRO14 campaign and with the league now on hiatus until after a couple of weeks of European competition, it seems like a good time to have a look at the Edinburgh squad and give a view on who has fizzed and who, if anyone, has gone flat.

Disclaimer: I’m only going to include those who’ve played a decent amount of minutes or deserve a mention based on impressive cameos. That means most of the internationals (eg John Barclay, Jamie Ritchie) won’t come into consideration just yet.

Pierre Schoeman. Impressive both in the loose and the tight just now. Some good handling over these games and made an immediate impact v Benetton when on for the Bhatti yellow card making 12 carries. One lovely soft inside pass comes to mind. Townsend would kill for him to be qualified now.

Jamie Bhatti. Has 105 minutes over 5 games to his Edinburgh career. His one start against Benetton didn’t go too well. Scrum seemed a little unstable early on and then he got a harsh yellow card and was hooked after the 10 minutes was up.

Mike Willemse. He has been decent around the park, bagged a couple of tries against Scarlets but has had some trouble at the lineout. Not entirely down to him but it is an area we haven’t been at our best. The return of Ben Toolis against Dragons certainly helped with the lineout stats.

Pietro Cecciarelli. Has quietly gone about his business and has made the tighthead berth his own in the absence of Simon Berghan and WP Nel. In scrummaging terms alone he has probably done enough to rise above the New Zealander in the pecking order. Perhaps just not quite there in the loose but kicking on after a quiet first season.

Murray Douglas. Is there no way we can keep him? He is a clear improvement on what we have at the club on full-time contracts – and I include returning Scotland players in that assessment. 50 tackles in 4 games is pretty impressive. I don’t see much Super Rugby but I’m surprised he has got to where he is without attracting Townsend’s gaze.

Fraser McKenzie. Yellow cards against Scarlets (shoulder charge) and Cardiff (dragging down maul) haven’t cost the team in any real sense, but they could have and although he’s abrasive I’m not seeing anything in the stats that will help his case once Gilco and Toolis resume.

Luke Crosbie. A great start to the year by the young wing forward. Played every minute of the season so far. Turnovers, plenty tackles and carries for good ground and a try v Benetton which although fortuitous he was there to take advantage. He’s making it as hard as possible for Cockers to rotate him.

Ally Miller. I’ll admit that before the season started to being unconvinced by Miller but he has played well both starting and from the bench. Always has an eye for a break and perhaps that’s why he’s off with the Sevens boys now as a full-time squad member. His performances, although good, weren’t good enough to keep the likes of Barclay and Ritchie twiddling their thumbs for long.

Nick Haining. He is definitely a good attacking ball carrying Number 8 which has surprised me a little as I wasn’t excited at all about his arrival at the club. Perhaps a little off the pace against Leinster but he wasn’t alone there. Unfortunately picked up a nasty looking hand injury early on against Scarlets.

Nic Groom. Kind of thrown into the deep end following Henry Pyrgos’ call up to the Scotland squad but handled all that came with that pretty well. Seems more of a threat going forward than Henry but also has mistakes in him that we don’t see from his rival 9. The charge down against Zebre following a lazy looking clearance kick being an example.

Charlie Shiel. Shiel has only had very limited game time. 76 minutes in total but when he has been on he has looked the most dangerous of all of our scrum halves. I know that’s been towards the end of games and fatigue may help his cause but he is a great option to have as he is hugely different from both Groom and Pyrgos. In a 3 minute cameo against Dragons he beat more defenders than anyone bar Magnus Bradbury who played the full 80.

Jaco van der Walt.  I get the impression he works nicely with fellow Saffer Groom and thought he’d been playing very well. I felt he had done enough to hold on to the starting shirt, but following defeat to Leinster Hickey took over and we put almost a half-century of points past Scarlets. He started again against Benetton but had an off day with the boot, albeit in horrendous conditions so it was all change again for Dragons. This stand-off battle may be set to run a bit.

Simon Hickey. Despite the fact it looks like Hickey may be at the forefront of Cockerill’s mind just now I still prefer the South African in the 10 shirt. I’ve read that some feel Hickey is the better attacker and if this was season 2018-2019 I’d agree but Jaco has started the season much better and carries a bigger threat now.

Mark Bennett. I think the first thing that jumps out re Bennett is that up till he was subbed at 64 minutes against Dragons he had played every minute of every game for Edinburgh this season. That alone is a result. His form is the proverbial icing on the cake. 5 games, 5 tries and at this stage you’d put money on him being back in the Scotland Squad in the New Year.

Matt Scott. Like his fellow centre, Scott seems to have put his injury woes behind him. The result is that we are seeing a leaner, more agile version of Matt. Still strong and hard to stop though as we saw against the Dragons. Age is perhaps not on his side when it comes to a recall in Scotland colours for the long term but in this form we could do a lot worse.

George Taylor. With Dean and Johnstone both injured at the start of the year as well as Scott, Taylor has had some decent minutes and has performed well. He’s got some work to do with the choices currently in front of him but he may well get more time to impress if my predictions regarding Bennet and Scott come through.

Duhan van Der Merwe. Back to his rampaging best after a disappointing end to last season. 4 tries already to his name and a significant part in several others. He has at this stage the best record in any European league for clean breaks per 80 minutes played. Defensively a little suspect which the numbers bear out with 6 missed tackles and 5 turnovers conceded but  if you say “he can only score tries” I’d reply “and the problem with that is?”

Jamie Farndale. We always knew that he was only keeping himself warm prior to the Sevens tour but he must have enjoyed his brief return to the full game. He has serious wheels and in a 3 game cameo bagged 2 tries. I loved seeing him chase down kickoffs and put the receiver under pressure.

Damien Hoyland. In the absence of Graham and Kinghorn, Edinburgh looked a little light at full-back. It’s not Fife’s best position and we’ve parted company with Tom Brown (also to the Sevens squad) who did look comfortable there. Hoyland has done a competent job although two things stick out for me; a fair few lost high balls and although he looks elusive running the ball back he almost always ran into contact.