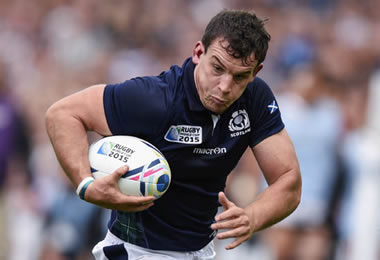 Exiled Scotland Flanker John Hardie has committed his rugby future to Kingston Park – and the Northern Hemisphere – by signing a new two-year deal with Newcastle Falcons.

Hardie, who has 16 caps for adopted country Scotland, pitched up at Newcastle following a training spell at Clermont during which he struggled for fitness having been out of the game since Edinburgh decided not to renew his contract.

This exclusion in turn came off the back of a disciplinary suspension at the capital club for alleged cocaine use, so for player and fans this new contract hopefully spells an end to what has been a troubling period in his life and the resumption of a settled and successful career focused on rugby.

Having secured a trial period with Newcastle, Hardie started for the Falcons in their Premiership victories over ‘Quins and Bath during November and has quickly become a key part of their pack alongside Gary Graham and a handful of other current and former Scotland players at the club.

Hardie’s next focus may well be on getting back into Gregor Townsend’s thoughts for the Scotland Six Nations squad. Before the rise of Hamish Watson, Hardie was a pretty vital cog in the 2015 World Cup team (he missed out on the miserable 6 Nations that year as he wasn’t yet in country). He did rate a call up as a replacement to the 2018 6 Nations squad but didn’t feature. Like many others, his last cap was the ill-fated loss to Fiji in Suva in 2017. Josh Strauss eventually came back from that, though Tim Visser did not.

Can the Hard Horse?