Mouthguards…I think you’re either for them or not. Science would tell us they “Act like a shock absorber, both spreading the force over a larger area and increasing the time for the peak force to occur. Dissipating the energy of the blow over a larger area and longer time reduces its effect preventing or vastly reducing any injury”. Or basically…you’re less likely to get your teeth knocked out.

I’m personally all for them. Deserving (as I have been on several occasions) of a smack in the face, they have saved me a hefty dental bill over my ‘career’. That said, I have also lost many a gumshield on muddy pitches and in busy changing rooms and have found myself numerous times on a Saturday morning boiling the kettle and burning my gums trying to fit replacement ones. Indeed, I had a teammate who had to knock on a random stranger’s front door in Melrose to use their kettle to perform said task 15 minutes before kick-off. Being the Borders of course, this was not an issue and had happened before to theses resilient residents of the Greenyards.

Opro Mouthguards were kind enough to send through a few of their Platinum products in various colours and designs to test out. They’d even gone so far as to do their homework and sent through a blue and red one in the colours of my beloved Langholm RFC. A nice touch. There was also one with some fangs on it which I quickly farmed out to an Under 18s RHC HS player in my street who seemed delighted with the design.

Next was the potentially tricky task of fitting the blighter. Opro have a patented ‘cradle’ methodology which is essentially the same steps as fitting any other ‘off-the-shelf’ mouthguard but with one crucial difference. That being a kind of spatula that clips onto the bottom of guard, allowing one to dip it into the boiling water, cool it, fit it properly around the teeth the set it without burning anything and also getting an even amount of pressure on all of your teeth, not just the front ones.

This works really well and is swift, simple and effective. I like it when that happens. The box that houses the guards is circular, vented and about the size of an ice-hockey puck. Difficult to lose being the bonus here for me. So far so good. Now for the road test. 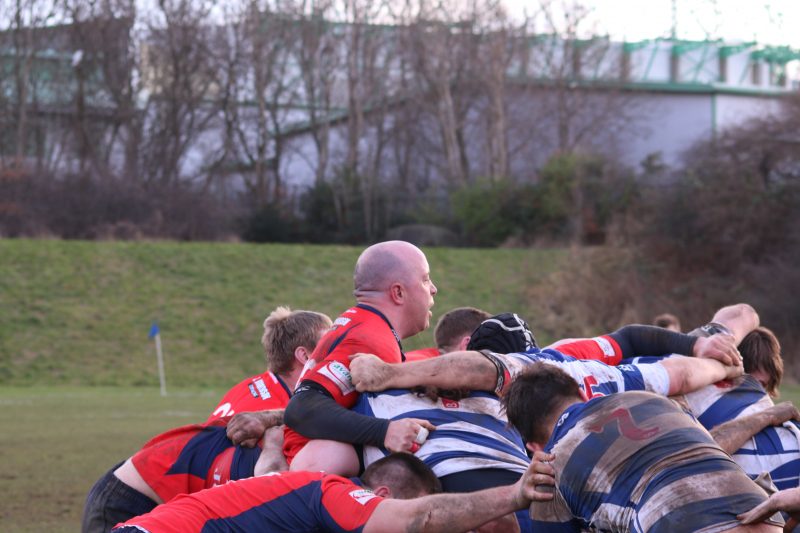 Over the course of the two games I wore the Opro mouthguard I can report that I had no problem with comfort or quality. It worked well. All my teeth are still in my skull and there were a few occasions where they potentially wouldn’t have been without protection. I still had that build-up of saliva that one gets and still had to take it out to explain to the referee that my bind wasn’t illegal or that I was in-fact supporting my own weight at that last ruck or whatever. These are, I think, universal expectations of ‘boil-and-bite’ style gum shields.

It’s important to point out here that Opro do offer two much higher specifications of mouthguards – High and Pro – but that my experience was that of their Mid-range. In terms of the brand itself, it’s a market leader in the UK for these products. They have official partnerships with the RFU, GB Taekwondo (now they need good gumshields), GB Hockey, England Rugby League and a host of Aviva Premiership teams, Pro 14 teams, Boxing, MMA, American Football….you get the impression.

Overall these are excellent products but beware, they are on the pricey side (RRP £24.99). Then so is dental reconstruction…so it’s down to you to decide whether you take the risk or not. If you don’t, then I can recommend you have a look at the Opro website as a first port of call: