Former “Killer Bee” Kelly Brown has announced his retirement from playing rugby at the end of the season, aged 34. He will continue with a coaching role in the Saracens academy which he has undertaken in recent years along with coaching the Navy’s rugby team. That he’s still close to selection – admittedly mainly on the bench these days – in the most powerful and effective rugby team in Europe – shows that he retires somewhere close to the top of the game.

About as nice a bloke as you’d find at the bottom of a ruck, Brown won three Premiership titles and last season’s European Champions Cup with Saracens, who he joined in 2010 from Glasgow. Previously with Melrose and then the Border Reivers until their demise, Brown retires with 64 Scotland caps having captained his country 14 times.

For a man who has battled a stammer all his life, Brown is also an accomplished speaker and singer and the tweets wishing him well from throughout the game show the regard with which he is held.

He was treated harshly in the early days of the Vern Cotter regime, sent into the wilderness in 2014 at the same time as John Barclay. Barclay was rumoured to have fallen out with interim coach Scott Johnson but you can’t see Kelly falling out with anyone. 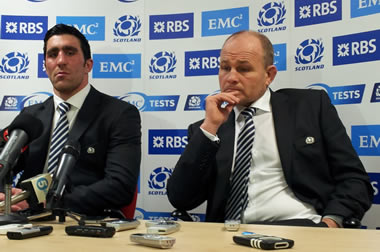 As a previous captain during the dark years, he was perhaps seen as a remnant of a team with a losing mindset, although his time at Saracens building the club culture there would seem to highlight the folly of that attitude.

Perhaps another one where Cotter should have taken more time to make up his own mind on a player rather than counsel from elsewhere. No matter the warm glow left by recent results, in the early days there were a few decisions aimed at putting the team on the right track that didn’t always come off. Kieran Low/Blair Cowan/Hugh Blake anyone?

The influence of the Killer Bees on Scottish back row play continues to this day.

While some teams – including Scotland – continue to pick 3 opensides, or 3 behemoths, we still hold up the archetype of a balanced back row as a workhorse tackler at 6, a breakdown scrabbler at 7 and a hefty ball-carrier with some footballing skills at 8.

Ironically Brown’s former backrow partner John Barclay is now filling that workhorse role for Scotland with more dynamic 7s available in Watson and Hardie, but Kelly Brown filled the role best during his time and will, I’m hopeful, reappear in the Scottish game before long as his coaching career continues.

We wish him all the best.