From fans favourites to single season disappointments via the irreplaceable, the players leaving the Warriors this season are an eclectic mix. Here’s a look at some of the bigger names who have played their last game in Glasgow colours.

Duncan Weir – The 25 year old No.10 confirmed in January that this season would be his last at the western end of the M8, having won the battle with Ruaridh Jackson only to be ousted by the upstart Finn Russell as the 10 of choice at club and international level. Duncan is making the short hop along the M8 to Edinburgh, where the Gunners fans will be hoping he can continue some of his scintillating club form this season. Weir is a Warriors centurion, and has scored over 700 points in his 6 years at Glasgow. A loss for the Warriors, but a great opportunity for Duncan to get his International and Club career back on track at a club that might suit his style of play a little better.

Taqele Naiyaravoro on the run for Glasgow – pic © Al Ross

Taqele Naiyaravaro – Another young player heading for the exit, but with less fanfare, is big T. The huge winger arrived with a reputation (and salary) to match his hulking frame and a solitary Wallaby cap, but the reality never matched the myth. A seeming lack of interest, a fairly one dimensional game and some serious flaws in some basic skills left the Warriors faithful largely disappointed. With that cheeky cap just before he left voiding any Scottish hopes of a project-player conversion he was always going to angle homewards sooner or later; let’s not forget he tried to get out of the contract before it even started… A cautionary tale for the SRU and Warriors management.

Leone Nakarawa – The second and most influential of the famous “Weegies from Fiji” is off to France, joining Racing 92 if the rumours are correct. The Warriors management let the lock away a year early, an arrangement no doubt eased by a significant amount of Euros being transferred to the Scotstoun bank account. There isn’t much more that can be said about Leone that hasn’t already been written somewhere on these pages, but here goes: Leone Nakarawa is possibly the single best foreign import that the Pro 12 (or Celtic League) has seen. He is one of the best locks in the world certainly in his attacking approach to the game, offering a real point of difference to the traditional lump bolstering the scrum with that outrageous offloading game of his. It has been an absolute delight to see him playing in Glasgow colours over the past 3 years: a huge character on and off the pitch, Leone is truly irreplaceable. We wish him all the best in France and just hope that Racing’s stodgy play from the Champions Cup final will be enhanced by his presence.

James Eddie – Another Warriors Centurion, James ended an excellent career in April, joining his family owned fish and seafood business. The ever dependable back rower started professionally with the Warriors in 2006, racking up 126 appearances but never managed to hold down a starting berth. He also spent a significant amount of time with Scotland 7s squad, and was involved in the 2014 Commonwealth games team. A club man in the style of his contemporary Al Kellock, Eddie was a massive fans favourite due to his committed and consistent performances and will be a big miss in the wider Warriors squad – good luck Jedi! 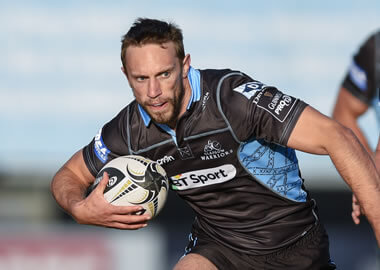 Mike Blair – In the twilight of his career, we always knew our time with ‘Blade’ would be short. Unfortunately, concussion problems meant that after 9 months, the former Scotland and Lions scrum half retired. In his short time at Scotstoun (as a player) the impact that Mike had was huge, with his game management and experience vital in those first World Cup months. He clearly had a remit of working with our young 9s like Ali Price and this will continue next year in his new role as an Assistant Coach. Anyone who has read his columns on the BBC or heard his commentary on ALBA will share my opinion – Mike Blair will go on to be a world class coach, no doubt aided by his current McPhail Scholarship sponsored trip to the Crusaders hothouse in New Zealand.

A few other mentions

The above are the clear, front line players that have departed the Warriors ranks who will be missed the most; however there have been a few others. The third of the original Fiji Weegies, Jerry Yanuyanutawa is off, as is Tyrone Holmes. Academy graduates Will Bordill and Glenn Bryce are off, with Australia and Edinburgh the destinations of choice. Kevin Bryce is also heading along the M8, but with a view to converting from fifth choice Glasgow hooker to second choice tighthead prop. Then there is the exit of Javan Sebastian, who must go down as one of the most clueless signings by the SRU/Glasgow. Signed in partnership with Ayr (whose name he can’t even spell on Twitter!), the former Welsh Under 18s front row never got even close to a Warriors jersey.

Finally a special mention must go to ‘The Coo’ – Mike Cusack. The balding throwback to ‘traditional front row physique’ left in March to join Newcastle Falcons. The big man held a special place in the Warriors fans hearts, and whilst he was injured/ill more often than not in his 5 years at the club, we all wish him well at his new home.