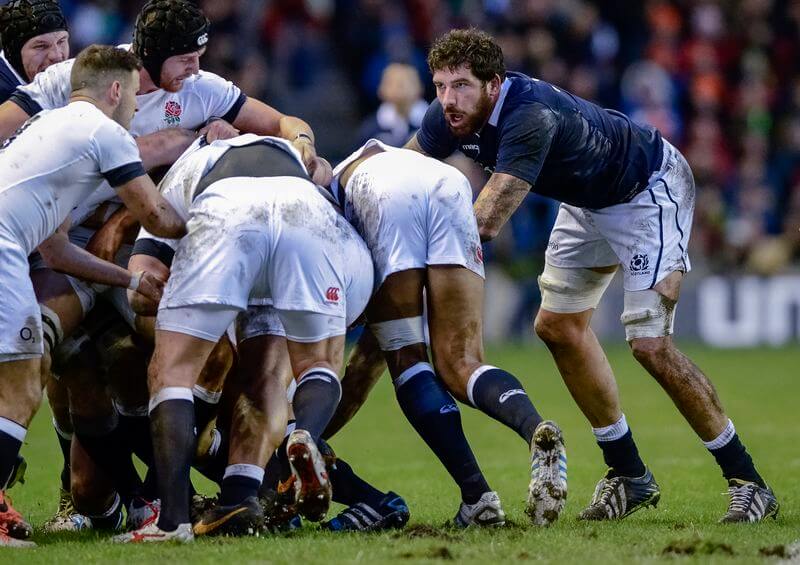 The England match was a slog

So far this tournament we’ve been looking at key strengths and weaknesses within opposition teams that Scotland are going to have to exploit or overcome and areas where Scotland must improve. So what how can Scotland overcome England this weekend?

This writer has been writing these preview pieces for the site since just after the last World Cup and “discipline” has been ever present in those lists. Quite frankly I don’t have the stomach for it. The game against Italy seemed a step back to the end of Andy Robinson’s reign and the coaches’ box at Murrayfield (henceforth known as Vern’s Rage Cage) felt the full force of the big man’s fury.

Grieg Laidlaw has made it clear that the coach has passed on his displeasure to the players and that he himself has been given short shrift. “We’ve seen both sides of Vern – He’s a hard man.”

Beating England away is not going to be easy. England have performed well so far this tournament and even the most optimistic Scotland fan must understand that a win is unlikely. Success might be measured on whether Scotland can keep within a score of England by the time the final whistle blows. It has been pointed out elsewhere than Scotland would not currently be bottom of the table if the Six Nations operated a bonus points system such are the fine margins of the defeats so far.

There are areas Scotland might exploit on Saturday. The English line out is not particularly strong and their full backs are weak under a high ball and liable to turnovers. However Scotland’s line out is not as formidable as it was in the Autumn and you could wrap a thousand portions of chips in the column inches used to dissect Scotland’s weakness under a high ball.

So this week we’re going to try something slightly different and look at the key battles on the pitch. It might save this writer’s sanity and give us some insight as to how Scotland might even have a chance of picking up what would be a shock win.

In a recent magazine interview Stuart Hogg explained how he had been working with world renowned sports psychologist Steve Black and put the more impetuous aspects of his game behind him. Hogg promptly went out and started spouting off about a lack of respect from England in the press. Same old, same old. Reading that interview it’s not hard to imagine a canny journalist phrasing a question in a way so as to elicit a controversial response. However Hogg has been around long enough to be wise to such cheap tricks leaving us to wonder where his head’s at.

Mike Brown returns to face Hogg after suffering a concussion against Italy. Hogg and Brown are remarkably similar figures within their respective nations. Both mercurial talents prone to as many moments of individual brilliance as they are lapses in concentration. Neither is particularly reliable under the high ball and both were turned over six times in the opening games of the Championship. Cotter says Dougie Fife has been brought in to sure up Scotland’s “kick, chase and receipt”. That might indicate that Scotland are planning on targeting Brown with Seymour and Fife pilling on the pressure rather than Hogg.

Hogg has made more metres with ball in hand (317) and beaten more defenders (12) than any other player in the Championship so far. That is a fairly damning statistic given the lack of return Scotland have seen in terms of points. Whether the blame lies with those around him for not providing sufficient cover and support or Hogg for needlessly holding on to the ball is open for debate.

Big Jim returns to add his grunt and hard headedness to the pack. He also brings the experience and leadership Scotland were sorely lacking against Italy. However for all the positive aspects of Hamilton’s game and his knowledge of the opposition the prospect of his being sent from the pitch at some point hangs above Scotland like the sword of Damocles.

The fowl stench of ill discipline has followed Scotland throughout the tournament and Romain Poite is not shy when it comes to dishing out yellow cards compared to some of his more patient contemporaries. Jim “who me sir?” Hamilton will have to be on his best behaviour.

England lack an out and out fetcher. However what they lack in technical skills they more than make up for in bulk. Cowan has more than proved his worth at openside for Scotland with the amount of ball he has won at the breakdown and this is a real opportunity for him to exploit. England will look to drive over the ball and knock competing players off their feet. Cowan will struggle to get hand on ball if those around him can’t get their body positions right at the breakdown.

Robshaw tops the tackle charts so far in the tournament having made 60 tackles in the first three games. Gray is third having made 48. Gray leads the way in terms of tackle completions taking down 98% of his opponents as opposed to Robshaws 96%. Both have slipped off the pace a little since the opening weekend but it’ll be interesting to see which player has the most impact on nullifying the opposition attack.

There was some concern at Scottish Rugby Blog towers when I brought up this point. No team should blame the referee for losing even if he can’t tell the time. However the point is more about Scotland’s game management. Get the referee on side and more often than not you will be given the benefit of the doubt when it comes to the finer points of the game. Start to rub him up the wrong way and it will be a very very long afternoon. Poite is notoriously impatient when it comes to the scrum and quick to reach for his pocket. In one season he managed to average 2.75 cards per game. The scrum is an area Scotland have been working on but they need to follow Poite’s instructions to the letter if they are going to have any chance of besting a weighty England pack and keeping the penalty count low.