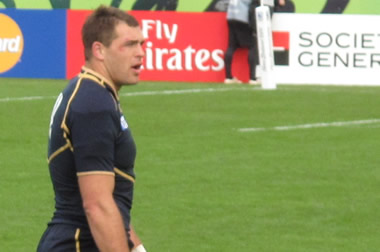 I’m a bit of a traditionalist when it comes to centres. I like a 12 to be a big lump, a crash ball runner with the ability to wreak havoc in attack but also to stand up his opposite number in defence. However, Scotland haven’t really had an inside centre in that mould since Rob Dewey failed to materialise into our version of Jamie Roberts. In contrast I like a 13 to be jinky, creative and hold the natural ability to step his man and either create a break or release the back three to do some damage. With a number of injuries and a host of options, let’s a have a look at the potential men in the middle for the Six Nations:

The young Edinburgh centre has done well in the last year. Not only has he grasped his place in the national side he’s also now a shoe-in for the 6N’s despite Edinburgh playing as if they don’t know each other this season. Although not the most dynamic of attackers and at times the Autumn Tests exposed him defensively, he has the Scotland number 12 jersey on his peg for now.

My personal choice at 13 but Alan K has already tagged him for full-back in Our Team. Hoggy has that aforementioned jinky quality in attack, runs good support lines and has fearlessness about running with the ball in hand which has been missing for years in the national side. Playing at full-back has challenged him to improve his kicking and fielding skills but his deadliest asset still remains his one-on-one skills in open play.

Played week-in-week-out for The Scarlets at 13 for a number of seasons and has the go forward and bulk to at least ask questions of the opposition but tends to frustrate as much as he excites. Sometimes you look at Lamont playing for Scotland and think he’s the best player in the team, other times he looks one-dimensional, impulsive and bereft of ideas. For experience, bulk and the ability to marshal the defensive line I would probably play him at 13 against England.

A lot of peoples favourite to get a cap against England but for me putting him up against Tuilagi and Barritt at Twickenham would be too big an ask. He’s got sound skills, a reassuring consistency to his performances and is part of a Glasgow Warriors backline that is flying with confidence but it may be a little too much, too soon for Dunbar.

The move to France was supposed to acclimatise Max Evans to the art of playing in a battlefield, to toughen him up in defence and further hone his already razor-sharp attacking instincts but it just hasn’t seemed to work. What we are left with is a player who suddenly looks every one of his 29 years of age. Might make the bench or the wing but not a safe pair of hands in the centre any more.

Another member of the impressive Warriors back division. Known for his sevens expertise he possesses a rare intensity and vision when on the ball but is untested at this level, particularly in defence. Was highly destructive when farmed out to  Dundee HSFP RFC in recent years and has been on blistering form this season when called upon by Glasgow.  A squad player for Scotland but not a starter.

Just back from a long lay-off, he is showing some surprisingly good form in a woeful Edinburgh team of late. Creative and hungry he’s undoubtedly a skilful player but is it too soon to put him back in at International level? How would he stand up to Tuilagi running at him? Too many question marks equals too soon for Cairns. May feature later in the tournament if injuries mount.

G-Dog (as no-one ever calls him) is probably looking in the rear-view mirror at his Scotland career these days but I wouldn’t be massively surprised if he makes the squad. Experienced but unspectacular and fragile, he would represent a backwards step in selection for Scotland. I can’t see it happening but you never know with a new coach at the helm and a few injuries he may get the call [editor’s note: he didn’t as yet].

Much heralded as the saviour of our centre-berths a couple of seasons ago. However, a disastrous loan spell at Edinburgh saw a huge loss of form and he’s struggled to impose himself back into the national rugby consciousness thereafter.  There’s no doubt he performs well at club level in England but his development into a world-class centre just hasn’t materialised. The jury is most definitely still out on Alex Grove.

Not at the Races

The Edinburgh duo of James King and John Houston aren’t showing the kind of form or class to make the step up this season. Houston has been quiet of late and King has been playing a lot of British & Irish Cup games for Gala. Neither are a viable option. Peter Murchie made the squad for the Autumn Tests and is undoubtedly a very good player for Glasgow Warriors but to start him at his less accomplished position of centre in the Six Nations is a gamble too far.

In case you were unaware both Joe Ansbro and Nick De Luca are broken (although there is still talk of De Luca making the later stages of the tournament).

Young Mark Bennett is the obvious candidate from the surprisingly sparse category of young Scottish centres. His spell in France went well and he’s back in the Warriors fold for next season – definitely one for the next World Cup or so but not just yet. Likewise for the Glasgow pair of Bruce Dick and James Johnstone, neither is anywhere near a regular for the Warriors but the coming seasons may change that.

For me, a player who was sadly overlooked at centre in recent seasons is ex-Watsonians and Border Reivers centre Bryan Rennie. Scottish qualified and a well-loved revelation at high flying Exeter Chiefs over the past few years he never got a look in for Scotland. Now playing for Bristol and a bit beyond International rugby he remains, in my view, a missed opportunity.

With all this in mind my choices for the centre positions for Scotland are Matt Scott and Sean Lamont with either Ben Cairns or Max Evans on the bench. An unspectacular selection but I would have had Hoggy in there if he wasn’t already selected as a tailgunner. Thanks Al.

7 comments on “Our Team: Centres”