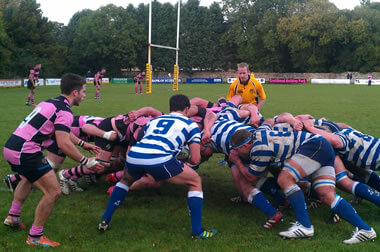 In many ways Ayr Rugby Club model the best of Scottish Club Rugby in the 21st Century. Arriving at the ground you find it busy with sponsors lunches, a full bar, volunteers scurrying around,  committee members clad in the distinctive Ayr Pink, children throwing rugby balls around & burgers sizzling away.

It is to Scottish Rugby what Gloucester is to England. Rugby has found a niche in Alloway, unrivalled locally for sporting excellence, drawing the farming community and the business community together to put Ayr on the map. It’s professionally run. There’s money, yes undoubtedly, but more. Vision, commitment, standards.

When the game starts, President Billy McHarg is in his usual vantage point of the far corner, forwards coach Peter Laverie is diagonally opposite him. Head Coach Kenny Murray prowls anxiously around like a caged tiger, behind the posts. Every inch of the pitch under the gaze of someone so no detail is missed. But on the pitch things are changing. For sometime Ayr were criticized for having too many foreign imports, and a limited game plan. Skippy Kelly, Robbie Colhoun, Frazier Climo, Mark Stewart… the ball rarely going beyond 10/12 and the reliable boot of Climo kicking them to trophies.

But not now. 13 of their starting XV today are born & bred in Scotland. The standards set by the antipodeans are being carried on by Scots with professional experience, White, Doneghan and Forrester. And the pack have the confidence to give the ball quickly to the dancing feet of Fergusson, the Gossman’s and Ross Curle (who combined to score Ayr’s 3rd try).

It’s a West of Scotland finishing school. Two years ago they brought through Mark Bennett at 17 (now in France), last year Robbie Fergusson at 18 (seriously bulked up this year!) and this year 17 year old Gavin Lowe is getting his chance.

The visitors today were Heriots. City Slickers. Flash & Dash. Hot & Cold. Except for large parts of this game, you could have mistaken each team for the other. While the Gossmans would be sprung quickly with fleet-of-foot sidesteps & arcing runs, Heriots – having gone 10-0 down early on to tries by Wisnewski & Sutherland – gradually took on Ayr up front with Jason Hill & his back row colleagues Brown & Mulligan, rucking & mauling impressively. Steve Lawrie, Edinburgh hooker & assistant Heriots coach had his head in his hands early on, but the pack look as through they are well drilled by him and held their own here.

The hefty Struan Cessford ploughed over for a 2nd half try, converted by Wilson, (who had kicked 2 first half penalties) to bring the score to 17-13 with 20 minutes left on the clock, and it was only good Ayr defence that denied Heriots in that final quarter from stealing the game and preserved Ayr’s 100% record this season. The Heriots backs never quite clicked in this game. In recent weeks they’ve switched captain Graham Wilson from 9 to 10 (to give SRU Academy prospect Hidalgo-Clyne game time at 9?) but he still looks like a 9 playing at 10. Max Learmonth has returned from a trial at Rotherham, bulked up in muscle, but perhaps with an edge taken off in speed. The unlucky Marc Teague lasted just 7 minutes before yet another injury.

Hero Today: Nick Cox has returned to the Ayr front row this year after retiring 12 months ago with a neck injury. His enthusiasm as a water boy last year showed his love of the game. And now he’s back on the pitch nothing gets the big Ayr crowd roaring quite like the Rev’s rumbles with ball in hand.

Second Hero Today: When a linesman pulled a muscle 10 minutes into the 2nd half an appeal went out for experienced help from the crowd. One gentleman emerged already wearing a suitable yellow jacket. Opportunity Knocked and he was ready.

Celebrity Spot: Ian Milne stalked the touchline supporting Heriots, but even The Bear has to give way in the popularity stakes round here to home produced Glasgow prop Gordon Reid, who was collecting congratulations for his fine Warriors game on Friday.