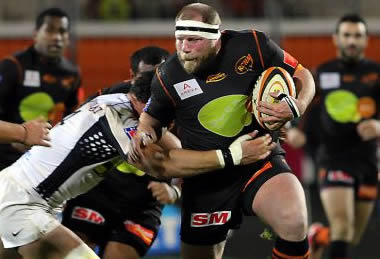 Currently playing for Narbonne in France, the former Melrose, Edinburgh and Scotland prop talks to Brodie Smithers about Edinburgh in the Heineken Cup, Scotland in the Six Nations, the lack of haggis suppers available in the South of France and driving Lorries…

After nine seasons as a player with Edinburgh Rugby you must be delighted to see the club progress to the semi-finals of the Heineken Cup for the first time in its history?

“I was delighted to see that. First of all with the way they played in the group stages to qualify and then the way they then won. The effort they put into to winning that quarter final at home in front of a massive crowd was good to watch. I was speaking to Thomas Poitrenaud, (Clément’s bother) who plays here. We were discussing and watching the game but because we were playing that day we missed the second half. So we both watched the second half over the weekend and were discussing it on Monday. It was incredible.”

You were part of the Edinburgh side that last made the quarter finals in 2004, did you envisage at the time that it would take another eight years before the club repeated the feat?

“Probably not at the time but with the rock n’ roll nature of Scottish Rugby it’s a shame it’s taken so long. With the financial limitations and the up-and-down nature of rugby in Scotland over the last few years it’s been difficult. I’m happy to see the boys doing well and playing with such confidence to go out there and give it everything.”

Do you think Toulouse underestimated Edinburgh?

“I’m not sure. I spoke to some of the French boys and they were quite surprised with some of the selections in the team. Not playing [Clement] Poitrenaud at full back and playing [Yannick] Jauzion there, a few of the boys were a bit shocked at that. I think the team Toulouse put out was pretty much their strongest team. What they had was what they had. They didn’t have everyone available for the game. I don’t know if they took it lightly or not, it’s tough to say but I think Toulouse gave it everything they had and I think Edinburgh maybe shocked them a little bit.”

The battle upfront was always going to be huge in that game, were you proud of the way the Edinburgh front row performed?

“I was chuffed to bits to see how well Fordy [Ross Ford] played. With the Scotland captaincy he’s got stronger and stronger and it’s definitely made him more confident and a better player. It’s all about the amount of time you spend playing together, combinations and understanding each other. I think that with Chunk [Allan Jacobsen], Fordy and Geoff [Cross] playing together so often at different levels that it’s now easy for them to play together.”

What was the reaction afterwards in France amongst the media, fans and players?

You must have been immensely proud?

“It was good, especially amongst the English guys in squad because they were working themselves up during the Six Nations. With no English teams involved in the semi-finals of either the Challenge or the Heineken Cup and with Edinburgh being there, there wasn’t much being said by the English boys, let alone the French lads!”

How do you now rate Edinburgh’s chances of winning the competition from here on in?

“I think they’ve got a good chance. They’ve got nothing to lose. Having Ulster outside of Ravenhill is always an advantage, although it’s still in Ireland. Ulster did a big job in beating Munster because I think if it had been Munster then mentally it would have been difficult. With it being Ulster then I think they’ve got a great chance of getting to the final and winning it. They’ve got nothing to lose, they’ve accomplished way more than I maybe even suspected, and they can be pretty dangerous.

“There’s no real pressure now, they can go there and play and I think that’ll make Edinburgh a dangerous team – because that’s what they’re good at.”

Edinburgh’s progress in Europe has been a huge boost for Scottish Rugby following a difficult Six Nations. What was your assessment of Scotland’s performance? What went wrong?

“It’s hard to put my finger on it. I never really spoke to any of the boys during the competition. It’s a tough one. There was lots of investment and lots of good play but we just didn’t cross the line. It’s hard, they obviously played their hearts out but I just think they maybe lacked a bit of experience this year. Just in killing games off or in making the key decision. International rugby comes down to split second decisions. The guys did well though, it’s a young group, it’s an exciting group and if the lads continue to learn then… For example the guys have learned during the Six Nations then come back and done well in the Heineken Cup for Edinburgh, so if they can take anything from that then it’s pretty good.”

On another note, one of your former club sides Melrose is celebrating back-to-back Championships as well as their Sevens this weekend, do you still keep an eye out for their results?

“Yeah, I played all my age-grade and club rugby with Gary Holborn (Melrose Prop) so I follow him and Melrose RFC on Twitter and always keep an eye the scores. Last week was a pretty exciting weekend with Melrose winning on the Friday night, then waiting on the Saturday for the Stirling County result and then with Edinburgh winning it was a pretty good weekend.”

You famously played in a couple of 2nd XV games for Stewarts Melville FP RFC in a bid to get game time during your last season at Edinburgh, do you think the link between the professional game and the club game in Scotland is as strong as it should be?

“I’ve not been in Scotland for a few years now but maybe not. It’s difficult when guys are coming from University, straight into Academies and not getting the experience of club rugby which used to be the natural link. When I played there was District Rugby which was a natural stepping stone to Scotland A and beyond. From what I’ve seen there’s maybe hope for young players from club rugby to get into the Pro set-up but it’s key for them to remember where they came from and try to give something back.”

You’ve been in French Club Rugby for four years now, Is it fair to say you’re settled in France now?

“Yes. I’ve just bought a place out here and I now have a French daughter so I’m pretty settled to be honest. I’ve got a holiday home business on the go here too that’s beginning to take off.”

Is there anything you’ve seen that you feel the Scottish rugby game could learn from the French model?

“Nothing too obvious. They have the same set-up out here with the regionalisation. Obviously there are only two professional teams in Scotland but out here there are 30-odd so the league model is similar, just bigger. The weather here is better though and there’s a lot more sport in general played. The schools are great; they give the kids every Wednesday afternoon off just to play sport.”

Do you miss Scotland? Can you see yourself returning anytime?

“I do miss it, you can’t just nip along to the chippy for a haggis supper. I’ve got some Irn Bru here and my in-laws bring me stuff over, they come down quite regularly. You can buy Scottish products here but it’s not quite the same. It’s nice to go back in the summer or at Christmas. The weather here is much nicer though.”

Finally, you gained some attention for getting an HGV license whilst playing for Edinburgh, do you still plan to drive after retirement?

“Yes. They’ve changed the laws recently so you have to sit a renewal course every five years now so that’s something I’ll need to look at. I read recently there’s a European shortage of drivers too.

“It’s always something that’s good to have in the back pocket if I need it.”